Here’s some info about one of the synthesizers I own; the Kawai SX-240. I bought it from a friend that did not make use of it. It was in nice shape, but the wooden sides made of chipboard and fake wood foil were a bit abused, so my dad decided to make new sides from solid wood, I don’t remember the type of wood right now. But they ended up pretty nice.

The SX-240 is a nice eight voice polyphonic analog synthesizer with digital oscillators and the ability to store presets. It has got two oscillators, one sub oscillator, noise and another sound source labeled “brass”.

It had got basic midi support for playing notes only. For saving/loading patches there is tape backup/restore functionality, so you can use sound files on a computer for this. I restored the original factory patches from the backup sound file available by Synthmania (http://www.synthmania.com/sx-240.htm). Some of the original patches are dull and some are truly awesome. The preset “space” really blows me away!

A traditional analog synthesizer is monophonic, you can only play one note at a time, this is because all parts of the analog circuitry (VCO, ADSR, VCA, VCF) needs to be involved in creating the sound. In order to make an analog synth polyphonic you need to duplicate the circuit for each voice. In the SX-240 you find a really charming section of duplicated circuitry for this: 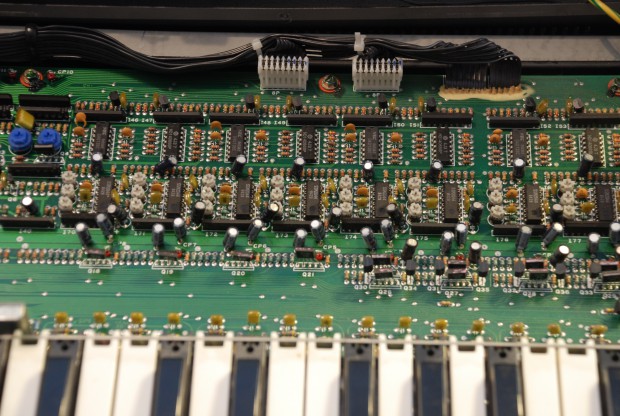 The sound character of the SX-240 can be described as a bit on the lo-fi side if I were to compare it to similar synths that I’ve used, like the Roland Juno 106 or JX8P. The ensemble effect changes the sounds drastically in a very lo-fi charming way.

It’s pretty useless for percussive sounds, the noise sound source is quite weak, there filter cannot self-resonate to create kicks, and you cannot route anything to rapidly change the pitch to create a kick or a tom. So it’s mostly suitable for melodic kind of sounds.

One kick ass feature is the ability to layer sounds, so you can load two different sounds and play them both at once on top of each other. So in that scenario you can end up playing sounds made from ten waveform sources at once. Plus this is a great way to experiment.

You may think by looking at it that editing is a hassle, but it’s actually really nice and intuitive. The options for editing and modulation are pretty extensive, but one basic thing that surprisingly enough is missing is the ability to mix the levels of the oscillators, you can only choose to include them or not. May sound like a problem but it works fine anyway.

Here is a random sound example of some sounds I’ve made.

The SX-240 suffers from problems with a rechargeable NICad memory battery that can start to leak after some time. The battery is placed in the middle of the circuit board, so when this happens the acid eats up the circuit, which results in the SX-240 being sent to synth heaven.

It is however easy to replace the battery with a standard lithium button cell, here’s another blog post about how to do this.