A while ago I bought an old Kawai SX-240 synthesizer. The SX-240 suffers from problems with a rechargeable NICad memory battery that can start to leak after some time. The battery is placed in the middle of the circuit board, so when this happens the acid eats up the circuit, killing the synth.

First I must add that I take no responsibility for anyone doing this. You may end up destroying the synth. I find this to be a simple job, but things can go wrong, so only do this if you know what you’re doing.

Before doing any work inside the synth I wanted to confirm that the tone loading and saving did work before. So I hooked up the “tape to” and “tape from” to my computer sound card, using mono cables, “tape from” took the sound from the headphone jack.

Writing to tape and verifying was pretty straight forward, I had to adjust the recording level and playback volume a few times as it complained about errors. I found the original presets for download at synthmania, so I restored them. Some of them are dull, but some of them are amazing.

One really special feature is that once you press the “tone load” button, the synth goes totally black, the display and all the leds shut off. You might at first think there is something malfunctioning, but this behavior seems to be by design, maybe to reduce disturbances to the signal. The synth is waiting for data, and once data is received it lights up again.

Anyway, a thread on Gearslutz suggested that exchanging the battery with a CR2032 lithium button cell battery seems to work fine. This CR2032 is really common, and so are holders for soldering, the battery is only 3 volts whilst the original battery is 3.6 volts, but this seems to work fine anyway. I’m not sure how soon it will run out, I just making sure to take regular tape backups of my sounds.

The original battery is rechargeable. Voltage is passed from the synth to the battery to charge it. This is a problem because the CR2032 is not rechargeable and we do not want to apply any voltage to it. So in order to prevent the synth form trying to recharge it a diode is placed to only allow current in one direction. So this is what the circuit looks like: 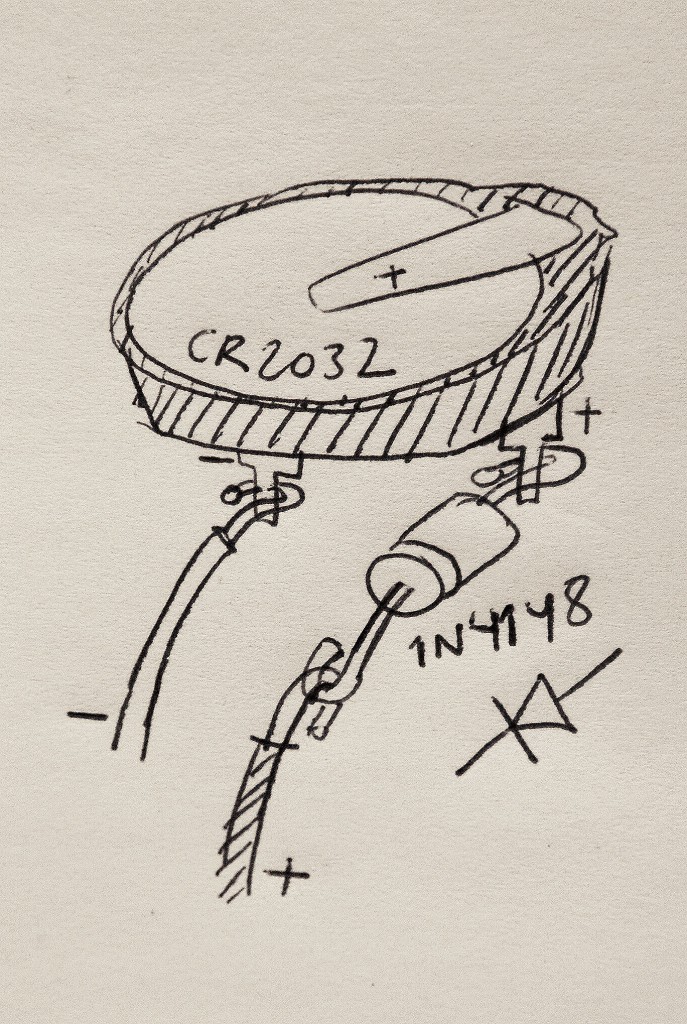 Plus from the battery holder goes trough a diode, for example a 1n4148.

Snip the battery away with a cable cutter. Solder two cables to the spots where the original battery was soldered, just leave the old soldering led, heat it, and bring the wires in there. The wires go to the battery holder with the diode. I placed the battery holder in a little plastic case that I taped to the side of the synth, like this: 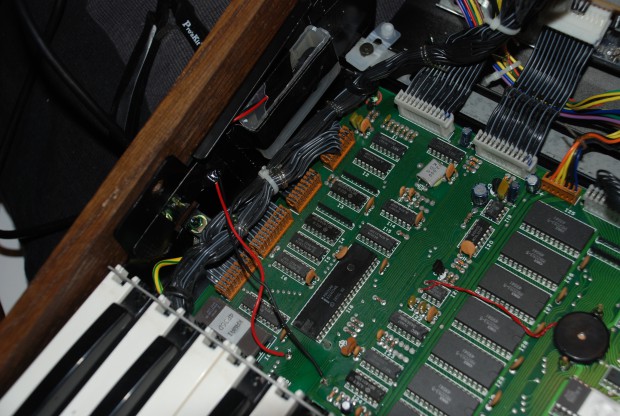